It will be held on Thursday, March 17, at the Backbencher. Doors will open at 5pm and the debate will start about 7pm.

Moot: Politics is a grubby business.

The chair is Duncan Garner.

Proceeds from ticket sales ($30) will go to the Red Cross (and are available from Brent in the RNZ office) for famiies of earthquake victims.

Afterwards there is an auction, with proceeds also going to the earthquake appeal. 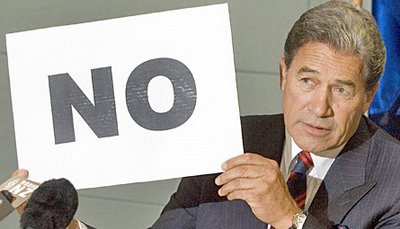 TVNZ’s Guyon Espiner is putting up for auction, the original “no” sign used by Winston Peters. This could go for a fair bit of money – especially as Winston will probably have a secret trust bidding for it.

Whale and I would be keen to buy the sign at the auction. If we win it, we guarantee it will turn up to most of the public meetings that Winston attends during the campaign. E-mail me if you are willing to contribute towards buying it at the auction, and how much you are able to contribute. If we get it for less than the amount pledged, we’ll divide it up pro-rata. And remember it is all for a good cause – money for Christchurch relief.

As well as the  no sign, the gallery will be auctioning off various other items such as the PM’s pinot noir. So. should be a fun night.