I’ve just published Curia’s monthly public polls newsletter. You can subscribe to it at this address. The summary is:

The average of the public polls has National 16% ahead of Labour. For the first time, the public polls average does not show a clear centre-right Government, but instead the Maori Party holding the balance of power

Australia has the Government only 4% to 6% behind the Opposition on a two party preferred basis. However in the upcoming Queensland state election Labor are 16% behind. Gillard has only 26% approval and 64% disapproval of the job she is doing as PM.

In the United States Barack Obama has had a great three months. His approval ratings have improved by a net 9%, and for economic management have gone up 20%. The country direction sentiment has improved by a net 32%. His re-election chances are now rated at 605, up from 49%. The Republican nomination is Mitt Romney’s to lose.  He only has 166 out of 1,144 delegates and still the preferred choice of only 37% of Republicans. However Intrade has him at 85% likely to gain the nomination.

The polls show Obama ahead of Romney by 5% in a head to head contest. However the Republicans remained favoured to keep control in the House (63%) and gain a majority in the Senate (61%)

In Canada the Conservatives have dropped 5% to 34%. 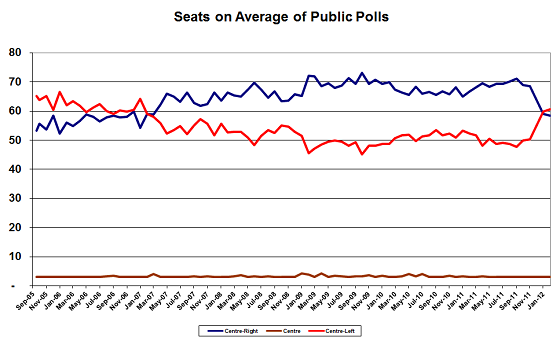 The graph above shows the combined effects of NZ First getting over the 5% threshold, and also National dropping from low 50s to high 40s.