Midsummer, at Circa, is a wickedly funny play. I laughed almost non stop during it. 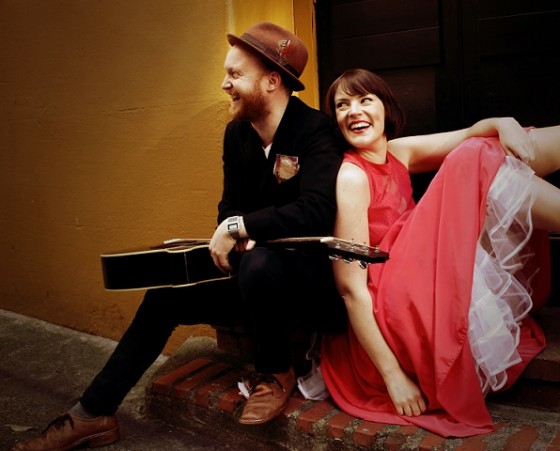 Kate Prior and Byron Coll play Bob and Helena. Helena is a lawyer and Bob a petty crim. They tell the story of how they met, and met again, and eventually their weekend of blowing $15,000 of cash embezzled from a local crime lord.

The scene of the initial hookup in the bar is hilarious, as their different interpretations of how it happened unfold.

Both Prior and Coll perform some songs as part of the play, but it is their acting which is just superb. They both played their roles with near comic genius. Kate Prior especially was spectacular when playing some of the minor characters such as the local crime lord ( Big Tiny Tam Callinan). Her Scottish accent, her eyes and her screwed up face were just a delight. Coll was excellent also.

They navigate a sister’s wedding (which ends with her 12 year old nephew declaring that Helena said it will only last a year as they met on the Internet), a failed bank deposit for the crime lord, and a visit to a local fetish club where they are left tied up most of the night by accident!

The set is worth a mention also. Simple yet effective with a series of boxes being used to create beds, steps, couches etc. And on the back wall you are intrigued by all the props hanging there which get used at some stage.

There are some serious themes to the play – Bob turning 35 and Helena’s failed previous relationship compared to her sister getting married. But the seriousness never gets in the way of a thumping good time.

The latter half of the play is slightly slower than the first half, but at 95 minutes in total you never get bored – far from it. My co-reviewer commented:

One of its singular charms is definitely its exuberant physicality. Both actors make such great use of all the stage, and undertake such acutely accurate and incredibly funny metamorphoses – into children, thuggish crims etc (let’s not forget the talking cock!). But as well as all the laughs, there was such a sweet poignancy to the recognisable lives and rites of engagement of the protagonists. The songs sung (and strummed) by the actors seemed to heighten both the energy and fun of the play as well as its tender intimacy and truth telling. What a rich and satisfying entertainment – all that laughing over all the clever (perfectly Scottish-accented) dialogue brought to life in such a masterly way by the actors.

Not a play for young kids, but definitely a play I can recommend to any adults wanting a great night out.

Midsummer is also reviewed at Theatreview.