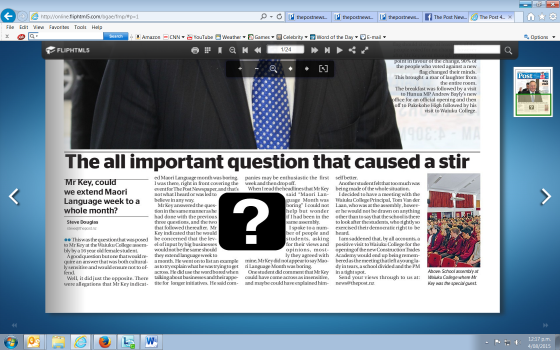 The SST had a front page lead about how the PM had reduced a young girl to tears because he had dismissed her idea of extending Maori Language Week to a Maori Language Month as boring.

The story was based on second hand testimony from another student (who seems to be an activist on Maori language issues) and had no verification from anyone at all.

Well I’ve been sent a copy of this article from a local newspaper, whose reporter was actually in the room! The key quote:

I was there, right in front covering the event for The Post Newspaper, and that’s not what I heard or was led to believe in any way,

The SST could have verified the claim with the journalist there. They decided not to, and smear the PM with an unsubstantiated story.

When I read the headlines that Mr Key said “Maori Language Month was boring” I could not help but wonder if I had been to the same assembly.

And in case you think it is just the reporter,he spoke to a number of students who were there and they mostly agreed with the reporter that Key did not say what was claimed.

What this reporter has done is proper journalism. What the SST is not.