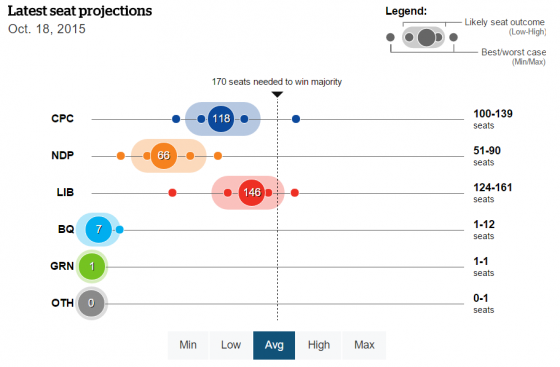 The long campaign in Canada has made a difference – but not for the Conservatives. It started with the hard left NDP leading and looking to maybe form Government for the first time ever and the Liberals (sort of like NZ Labour, but more business friendly and  more corrupt) in third place.

But the Liberals are projected to win the most seats and if so they will form Government. Getting a majority is unlikely but not impossible.

If the Conservatives do better than expected then it could be a fascinating constitutional issue, with the Governor-General playing a role.

The cultural history of Canada is that the largest party has been allowed to form Government, even if opposition parties could defeat them. So even though the NDP could have in the past put the Liberals into Government, they have not as Conservatives won the most seats.

But this tradition may end. The NDP have said they will not support a Conservative minority Government, even if they win the most seats. However neither have they said they would support a Liberal Government if the Liberals win fewer seats than the Conservatives. So you could have Harper ask the Governor-General to allow him to test the confidence of the House.

The Globe and Mail have forecast:

So not looking for Stephen Harper, but the polls have been wrong in other races recently so we’ll see the results as they come in!