Over the last few years I’ve been putting together my family tree. Having now got as much info as it looks like I can gather, I thought I’d blog on my family tree, it may be a useful source of info for relatives and the like, and perhaps of some interest to others.

Basically I’m going to cover the families of my eight great grand-parents (none of whom I met/remember – they died between 1920 and 1969). The four families initially are on my mother’s aide and are:

I’ll start with the Newths as they are the branch I can trace back the furthest. 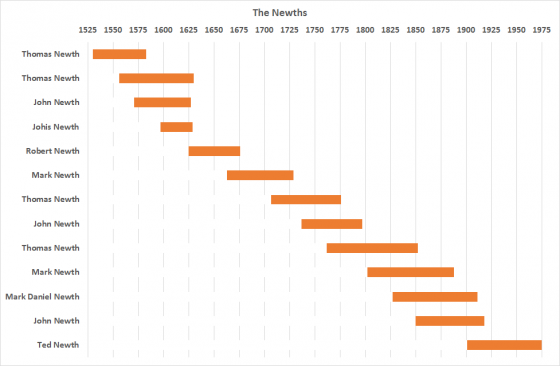 My 12th great grand father was Thomas Newth. He was born in Horsley, Gloucestershire (England) in 1530 and died in 1583 or 1583 in Horsley or Dursley. His wife was Joan Byrde.

He has six children, and his oldest son Thomas born in 1556 is my 11th great father. Thomas lives to 74 and died in 1630 in Wootton Bassett, Wiltshire. His wife was Margaret Whitterne. They had one son called John Newth who died in 1627, before his father.

He had three children before he died with Joan Bungne. The youngest was called Robert Filius Johis Newth. He was born in 1625 and in Malmesbury and is my 8th great grand father. He died in 1676 aged around 51 and had one child with Margaret Bosse. He was also a glazier/

Mark Newth was born in 1663 and died in 1729, aged 66. His second marriage to Eleanor White produced four children, and the third oldest Thomas was born in 1707. He lived until 1776 in Malmesbury.

Malmesbury incidentally was prominent in the Middle Ages as a centre of learning due to Malmesbury Abbey.

Thomas married Alice Hawkins in 1730 and they had six children. Thomas was in a trade as he was a master who had an apprentice – a Jas Holden. His 4th oldest son John was my 5th great grand father, born in 1737 and died in 1797. He married Jane Ogbourne in 1762 and they had five children.

The oldest, Thomas Newth, is my 4th great grand father. Thomas Newth was born in 1762 in Wootton Bassett, Wiltshire, his father, John, was 25 and his mother, Jane, was 22. He married Elizabeth Horsell and they had seven children together. He then married Mary Brain and they had one daughter together. He died in August 1852 in Crickdale, Wiltshire, at the impressive age of 90.

Their sixth oldest son Mark Newth in my 3rd great grand father. He was born in 1802 in Wootton Bassett and emigrated out to New Zealand in 1842. He was the foreman of the NZ Company’s preliminary expedition to Nelson under Captain Wakefield.

He married Ann Nancy Bye on February 24, 1825, in Wootton Bassett, Wiltshire. They had 11 children in 12 years. In 1873 he had his 48th wedding anniversary with 57 children, grand children and great grand children. Their marriage lasted 60 years until Ann Nancy died in 1886.

He died on July 19, 1888, in Nelson of bronchitis having lived a long life of 86 years, and was buried at the Waimea West cemetery. 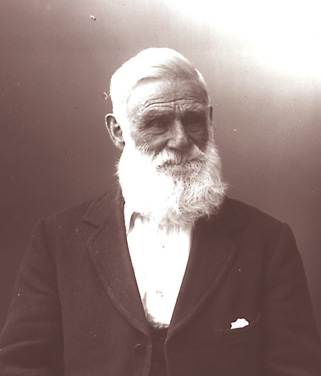 In Waimea West, Mark worked as labourer and then took on farming, owning a freehold property. During his time in Waimea he was one of the appointed trustees of the Waimea East Churchyard. After he moved north to Foxton he was employed as a labourer then flax miller/cutter.

Mark’s second oldest son was called John Newth and he is my great grand father. He was born in Nelson in 1850 and married Elizabeth Ann Clemens in 1883 in Picton. They had eleven children.

His early years were in Marlborough where he was the publican for the Empire Hotel and also a miner at Wairau. He played cricket for the Blenheim Cricket Club.

John Newth was a member of the first Waihi Borough Council, formed in 1902. Six years later he was elected Mayor, which office he held for four consecutive terms. He was a labourer and inaugural president of the Waihi Miners’ Union serving for five years until 1907. He was elected Mayor in 1908.

He died just seven years after his father in November 1918 as a victim of the influenza epidemic.

My grand father, Mark Edward (called Ted) Newth was born in Waihi in 1901 and died in 1975 when I was eight. He had two children with my grandmother, Kathleen (Kath) Milne – my mother Kay and uncle Mark.  Ted was born in Auckland and lived and died in Pukerua Bay.He married Kath in 1934.

Ted worked for the Railways as a line erector.