This is Part 3 of my family tree, covering the Clemens, my mother’s father’s mother’s family.

It seems I am distantly related to Samuel Clemens, better known as Mark Twain. I don’t know the exact relationship but when he visited New Zealand in 1895, he caught up with my great grand mother whom he was related to.

Jonathon Clemens my 6th great-grandfather was a blacksmith in Devo, England. He married Christian Mussell and they had one son. Johnathon Clemens joined with over 200 people in 1723 to sign the oath of allegiance to Government.

My 5th great-grandfather Anthony Clemens was born in 1707. He married Christian Saunder in 1742 and died in 1777 in St Giles in the Woods. He was also a blacksmith.

Anthony’s only son, also called Anthony Clemens was born in 1744. He is my 4th great-grandfather. He married Grace Cook in 1766 and they had eight or nine children. He died in 1806. Like his father and grandfather he was a blacksmith and was also the clerk of his parish.

His 7th child was called William Edward Clemens, my 3rd great-grandfather. William was born in 1778 in St Giles in the Woods and married Frances Williams in 1803. They had eight children and William died six years later aged 50 in 1828.  William was a exciseman, which took him around England.

Edward WIlliam Clemens is my 2nd great-grandfather and was born in 1822 in Bradford on Avon. He worked as a baker and at the age of 20 moved to New Zealand working as the cabin boy on the ship “Fifeshire” which landed in Nelson. Edward became a Master Mariner and went back to England and then to Australia in 1851. In Australia he married 19 year old Mary Doherty (from Ireland) there in 1857 and served with the Melbourne Water Police. 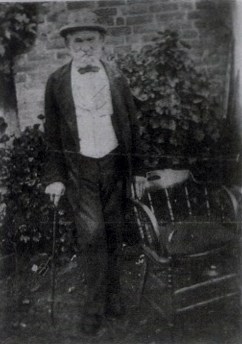 They then moved to New Zealand settling in Shakespeare Bay, Picton. He prospected coal and established a farm before dying in Marlborough aged 83 in 1905. They had 12 children. He left an estate of 829 pounds.

The 5th of their 12 children was Elizabeth Ann Clemens, my great-grandmother. She was born in 1862 in Picton. She married, aged 21, John Newth in 1883.  She had 11 children with John including my grandfather Ted (Mark Edward). She died in Auckland in 1949 aged 87. She was buried in Thames Valley in the Bay of Plenty.