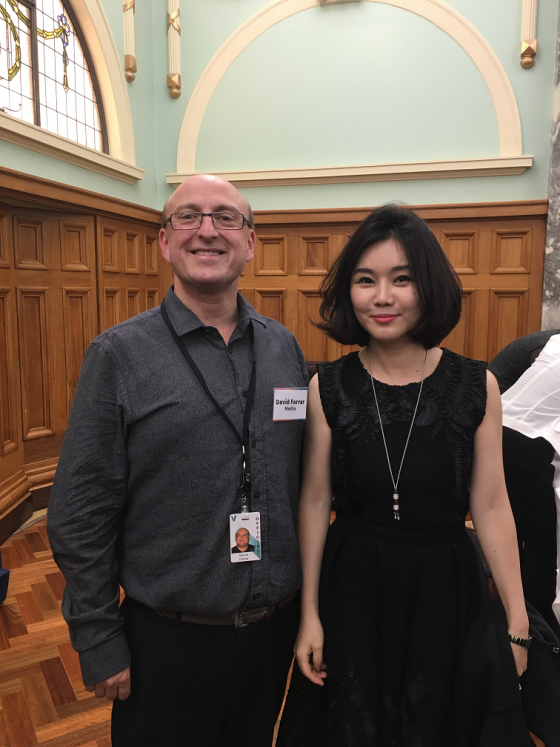 I was thrilled this week to meet Hyeonseo Lee.

I got a call from Melissa Lee last week telling me that she is hosting a dinner at Parliament with the National Unification Advisory Council and the guest speaker is a defector from North Korea. She thought I might be interested as I had blogged on North Korea.

A few months ago I had read an amazing book about North Korea by a defector, Hyeonseo Lee. It is called The Girl with Seven Names. I had raved about the book to friends and family and even lent it out to them.

So I asked Melissa ho the defector was, not expecting it would be a name I had heard of. When Melissa said it is a young women who wrote the book “The Girl With Seven Names” I excitedly exclaimed to her how I had not just heard of her, but read her book and been talking about it for months. So I was very excited to get to meet Hyeonseo in person.

She spoke on her life story to around 100 MPs, diplomats, members of the National Unification Advisory Council and some of the NZ veterans of the Korean War. Earlier that day Melissa had moved in Parliament a resolution:

That this House condemn the human rights record of the Democratic People’s Republic of Korea, which is detailed in the United Nations 2014 commission of inquiry into both systematic abuse and repression, and that this House call on the Democratic People’s Republic of Korea to give access to human rights bodies and international agencies to improve the lives of the North Korean people.

This passed without dissent.

There are two major themes to Hyeonseo’s book that resonated with me – her personal story, and the insight into what life is really like in North Korea.

Her personal story is quite amazing. She was basically an accidental defector. She lived on the border with China and the day before her 18th birthday, she decided to cross the border just to see what life was like in China. Her intention was to return, and as she was not yet an adult, there would be lesser consequences for her if she got caught – would be a youthful prank. Her family were not enemies of the state, they were fairly well off middle class (for North Korea).

However the security police got wind that she had gone missing and may have crossed the border, and her family warned her that if she came back then the whole family might be arrested and sent to a camp. So she had to stay in China.

She then spent around seven years in China living undercover. Chinese authorities will send back North Koreans to North Korea so she had to pretend to be Chinese. This involved assuming a number of identities (hence the title of the book, The Girl With Seven Names) and years of living in fear that at any point she may be discovered and deported.

She eventually made her way out of China and with fake papers managed to fly to South Korea. She was petrified that they would not welcome her, but when she declared she was a defector, their first words were “Welcome home”. However it then turned bad as her fake Chinese papers were so convincing that they decided she was Chinese and might deport her back to China (and then North Korea). After a couple of weeks thought she convinced them that she was in fact North Korean, and she got to live in South Korea.

Her story did not end there, as she later went back to get her mother and family out. They came close to disaster many times, were blackmailed and betrayed and eventually arrested in Laos. Then a good samaritan struck, as an random Australian businessman who was in the building paid a huge sum to authorities to get her family released, and they got back to South Korea. The generosity of strangers can be staggering.

So her personal story is an adventure that would be amazing even as fiction, let alone as a true story.

But her depiction of life in North Korea is also powerful. She writes of the weekly inspection of their houses to check their photos of the Great Leader are straight. They can be punished if one of the photos are crooked. They are forced to effectively worship the Kims and schools are basically state run brainwashing camps.

And the brainwashing works. Until she ended up in China, she had no idea that it was all lies.  The control of the people by the state is so total, you have an entire population enslaved.

I actually got angry reading her book, recalling a certain prominent New Zealander who visited North Korea and declared how wonderful it seemed to be, and how happy the people are that they met – seemingly unaware that all they saw was propaganda put on by the Government.

If there is any one book you should read about North Korea, this is the one. It’s not written by an enemy of the state. It’s just the life of a normal 17 year old girl who crossed a river and ended up being hunted for the best part of a decade.

On a personal level was great to meet the author of a book which I had found so compelling. I had so many questions for her, that Melissa finally had to take her away around the room, as I was hogging her time 🙂