The DIA e-mailed me this week to say that they are releasing the data below, sought by Nicky Hagar since February 2015, showing calls and texts from Jason Ede to me between January to August 2011 when Jason worked for Ministerial Services. 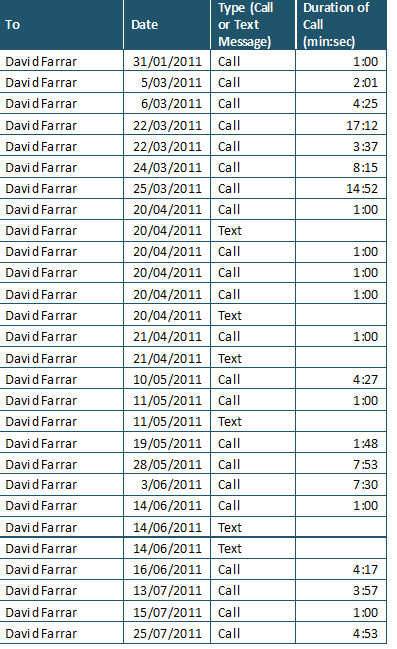 So eliminating the one minute ones which would be no answer/voicemails, this shows 13 phone calls over eight months, which is around one phone call every 19 days. Note that over that time period I’ll generally write 200 or more blog posts. A huge conspiracy I am sure. For stats fans, the average length of the phone calls was six minutes and 32 seconds.

Considering most days I get 20+ phone calls, it shows that in fact Jason was one of my more infrequent callers. I talk to quite a few people in Labour more often than once every 19 days!

Oh yeah there were also six text messages over eight months. This will of course be breathlessly reported by Hager as proof of, well something, and repeated uncritically by some in the media.

There is a more serious issue in The Ombudsman directing DIA to release this info. It means there is now a precedent. So hey someone should ask DIA for the details of all phone calls and text messages from say Helen Clark to journalists from 2000 to 2008. Imagine the fun we could have looking at her call logs and what stories were published by the journalists within the next 24 hours?

I am sure Peter Doone would love to be able to OIA details of all texts and phone calls between Clark and her staff and media around the time of his ouster.

At some stage Labour will be in Government again, and this means we can OIA every one of their press secretaries every month demanding a detailed list of every phone call they have made, how long it lasted and to whom.  Will be great fun.

I don’t mind the data on phone calls to me being released.  It’s laughable showing six texts and 13 phone calls over eight months. About as exciting as watching paint dry. But there is a bigger issue with this precedent.