Terms of trade is a measure of the purchasing power of New Zealand’s exports abroad. A 5.1 percent rise in the March quarter means New Zealand can buy 5.1 percent more imports for the same amount of exports.

In the March 2017 quarter, import prices rose 2.7 percent, influenced by a price rise for crude oil. Crude oil is still about half its mid-2012 price. However, since the end of 2008, import prices have fallen by about a quarter, with price falls for imported manufactured goods influenced by quality improvements. More powerful electronic goods are an example of a quality improvement.

During the early 1970s, export commodity prices for dairy, meat, and wool began to increase, pushing the terms of trade to its highest level. However, this boom for export prices was short-lived, and New Zealand’s terms of trade fell after key export market Great Britain joined the European Economic Community, and after the first big oil crisis pushed up fuel prices sharply in late 1973.

So our best terms of trade since the UK joined the EU. Think about that. 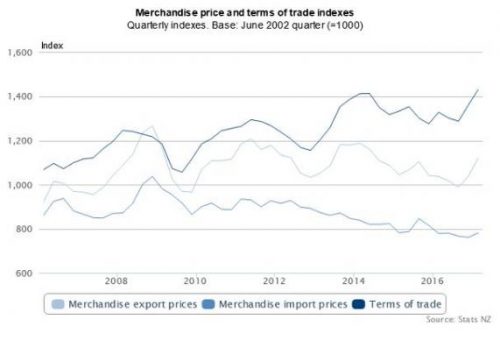 This chart from interest.co.nz tells a story.  The declining costs of imports is a major contributor. A reminder of why we benefit from fewer trade barriers.