When two of your own MPs say the party is morally compromised by having a fraudster as their leader, it is very damaging. This is very different to having opponents say it.

With Labour finally having a leader that appeals to the same demographics as the Greens, there is a risk their support could collapse below the 5% threshold, which would put them out of Parliament. Their recent results are:

Before Labour started collapsing post-Clark they were a 5% to 7% party. If Labour claims back their lost supporters, then they only have around a 2% buffer over the 5% threshold.

Thanks to Metiria Turei, the Green Party is in the midst of an identity crisis.

It’s a crisis that cuts to the heart of what the party stands for, and what its priorities are.

Just as importantly, it cuts to the heart of its name: The Greens.

The party doesn’t look like the strong, unwavering voice for the environment anymore.

It is not focussed on forests and rivers, or climate change, or conservation underfunding, or waste and pollution reduction.

It is now a party focussed on fighting for the rights of beneficiaries. It is focussed on legitimising benefit fraud, boosting welfare payments, and removing welfare obligations.

Metira Turei has switched the Green Party into a meltdown mode that it refuses to switch off.

The Greens seem to be in pathological denial about the damage that Turei’s benefit fraud admission is doing.

If Monday’s double resignation of two senior MPs isn’t enough to send the message “enough is enough”, then what is?

The Greens need to step back and ask themselves the most simple and important of questions – how does this look to voters? It obviously looks appalling, but the Greens can’t see that.

The Greens are curled up in a collective “defensive crunch” of self-denial.

They need to realise the resignations of David Clendon and Kennedy Graham are not going to look to the wider public like clearing out of dead wood; rather, it will make the party look woefully unstable just seven weeks out from the election.

This is the issue for voters. Do they want a National-led Government or a Labour-Greens Government?

They need to realise very serious charges may yet come from the Ministry of Social Development – charges of fraud under the Crimes Act are possible.

If charges are laid, and only then Turei stands down it will be too late.

The party establishment moved to contain the fall-out in the way that other parties do – to criticise the two rebel MPs as pretty useless and lazy, which is particularly unfair on Kennedy Graham who works his butt off in strange areas of international law.That accounts for their joint statement sounding more like a judgment from The Hague.But the telling line is the one that says “the timing by Metiria of her admissions, and her continuing justification of her actions, we see as incompatible with the standards of leadership of the Green Party.”It is the “continuing justification” of her actions that have caused so much division across the country, not the original offence.

This is the key. It is not what Turei did 25 years ago that is the real issue. It is the Greens trying to portray what she did as right, claiming she had no choice.

It is comforting to know that there are some in the Green Party who do not see Turei as a perpetual victim, and that there are members in the party who are trying to have normal standards apply.But there she stays at No 1 because to resign would be to admit that Turei’s calculated gambles, including admitting benefit fraud, had been a disaster.

A poll showed a majority of even Green voters were critical of her. 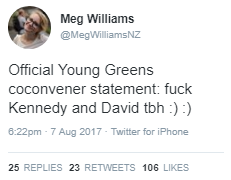 And this is the response from the Greens youth wing. Speaks for itself.