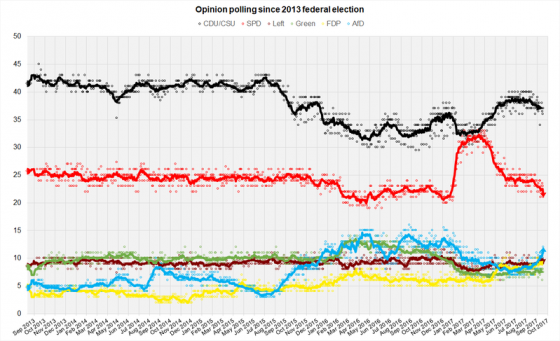 Germany is also voting this weekend, on Sunday. As you can see in the above chart, the SPD almost were at parity with Merkel’s CDU but they are again 15% behind.

So there is little doubt Merkel will remain Chancellor but who will make up her Government. The parties likely to make the Bundestag are:

No-one wants to be in coalition with the AfD. In fact they are even squabbling over who will have to sit next to them in Parliament.

A CDU/FDP coalition only has 286 seats and they need 300 to govern so what is quite possible is a CDU/FDP/Green coalition. The German Greens are far more moderate and sensible than the NZ Greens and aren’t just socialists with a green tinge.

You could get another CDU/SPD grand coalition but this is less likely.

SPD/Left/Greens only total 259 seats so would need FDP support (unlikely) to be able to govern.

Personally I’ll be quite relieved if Merkel remains Chancellor. She is a beacon of stability. I think she mishandled the refugee crisis, but has been good in most other areas.