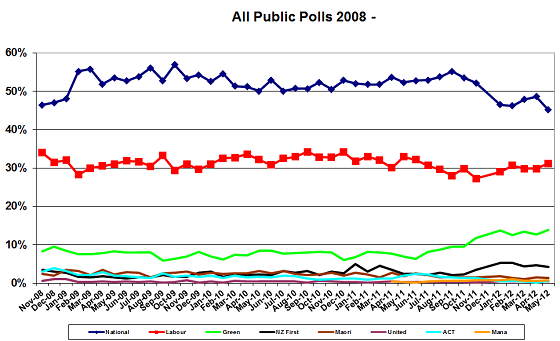 The average of the public polls has National 14% ahead of Labour, down from 19% in April. The centre-right has 59 out of 121 seats on the May average which would have the Maori Party hold the balance of power.

Australia has one poll putting the Government 23% behind the Opposition on a two party preferred basis.

In the United States Barack Obama is 1.5% ahead of Mitt Romney in the polls, but projected to be well ahead in likely electoral college votes. However his re-election chances have dropped from 60% to 55%.

The Republicans remained favoured to keep control in the House (77%) and gain a majority in the Senate (58%).

In the UK the Conservatives are now 12% behind Labour, and continuing to decline.

In Canada the Conservatives are tied with the NDP, whom are projected to form a minority Government if there was an election today.

The normal two tables are provided comparing the country direction sentiment and head of government approval sentiment for the five countries. New Zealand continues to stand out in both.

This newsletter is normally only available by e-mail.  If you would like to receive future issues, please  go to http://listserver.actrix.co.nz/cgi-bin/mailman/listinfo/polling-newsletter to subscribe yourself.