Some of the e-mails and letters being sent to MPs and media are almost beyond belief. I don’t know how they think they will persuade people with such arguments. Here’s a collection of some of the worse. 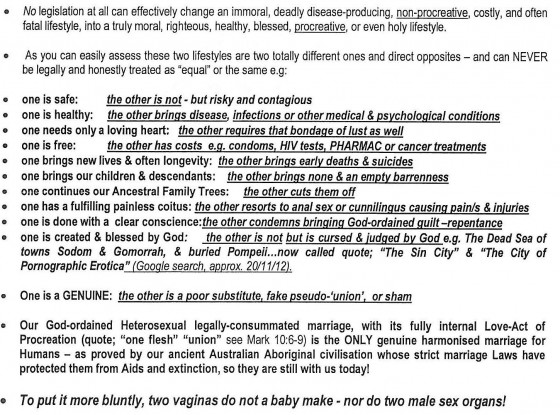 This one is classy. If you vote “pro gay” your grandson may end up kissing a man in front of you or even worse having sex in your home with a man. Not because he is gay, but because he thinks you will approve of it!

And some quotes from assorted letters:

“Love in itself is not illegal, although the way it is expressed may be (rape, adultery, incest, euthanasia, abortion, murder).”

I didn’t know rape and murder were products of love!

“Trying to normalise and legalise a sexual perversion such as homosexuality can also cause a lot of harm in creating criminals out of normally law-abiding citizens or unfairly restricts their activities.”

“If a man does this to women he can be charged with sodomy. So how is it that there are people in the government who want to make this act between two people equal with marriage as it now stands? How can sodomy be illegal in one case and legal in another?”

Someone is not up to date with the law!

Oh yes, compulsion is the next step!

“It is my belief that homosexual and lesbian feelings are a usually a result of some neglect, dysfunction or abuse. Homosexual men commonly have had emotional distance or lack of love from their fathers; lesbians often have had a poor relationship with their mother. Also, sexual abuse is another factor.

Hear that lesbians – it is all the fault of your parents!