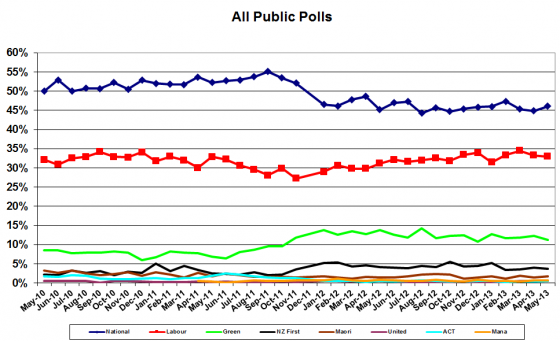 The average of the public polls has National 13% ahead of Labour – 1% more than in April. The seat projection is centre-right 60 seats, centre-left 58.

Australia sees Labor slip to 12% behind the Coalition with 90 days to go. Current forecasts are for Labor to get fewer than half the seats of the Coalition.

In the United States little change this month with the Democrats and Republicans now tied on the generic congressional poll average.

In the UK the Labour leads the Conservatives by 4% and the UKIP are stable on 16%.

In Canada the Liberals continue to soar and are up 5% to 40% under the new leadership of Justin Trudeau.

We also carry details of polls in New Zealand on NCEA, electricity, waka jumping, food in schools and affordable housing plus the normal business and consumer confidence polls.

Also of interest may be the comparison between the head of government approval ratings in the five main countries. They are, from worst to best: