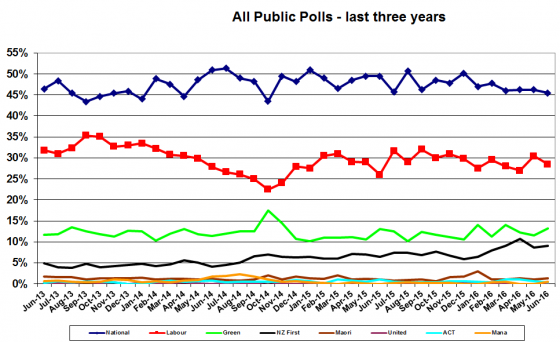 The monthly polling newsletter is out. The summary is:

There were two political voting polls in June 2016 – a Roy Morgan and a One News Colmar Brunton.

The average of the public polls has National 17% ahead of Labour in June, up 1% from May. The current seat projection is centre-right 58 seats, centre-left 51 which would see NZ First hold the balance of power.

In the United States the real winner from the election campaign is Barack Obama. His favourability and approval ratings have been rising all year as Americans seem to think he isn’t as bad as the two people vying to succeed him.

Clinton’s chances of winning have risen from 69% to 76% in the prediction markets as she has an average 6% lead in the polls. The electoral college projection remains constant with Clinton ahead by 126 electors.

In June in the UK they voted to leave the EU. Scotland may leave the UK. David Cameron is going, Nigel Farage has gone and Jeremy Corbyn is trying not to leave. A turbulent month in the UK where once again the polls were mainly wrong.

In Australia the polls were very accurate in the election in terms of the two party preferred vote. Almost all showed a very narrow margin to the Coalition.

We also carry details of polls on housing plus the normal business and consumer confidence polls.