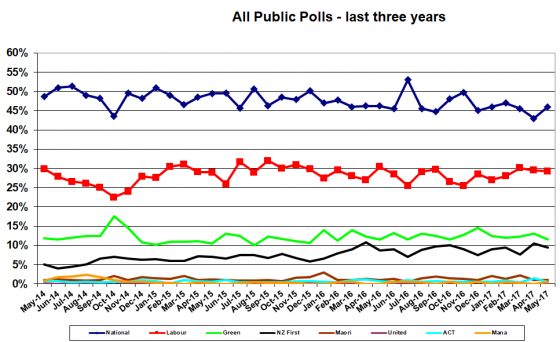 The May 2017 polls newsletter is out. The summary is:

There were two political voting polls in May – a Roy Morgan and a One News Colmar Brunton.

The average of the public polls sees National 17% ahead of Labour in May, up 4% from April.

The current seat projection is centre-right 58 seats, centre-left 50 which would see NZ First hold the balance of power.

In the United States Trump saw a marked decline in his approval ratings in May, especially in the area of healthcare.

In the UK as we now know, the polls got it wrong again. However, they did pick up the massive shift in support in May which saw Labour go up 10% in the polls, Theresa May’s net approval rating fall 16% and Jeremy Corbyn’s climb an astonishing 50%!

In Australia, Labor retains a comfortable lead over the Coalition.

In Canada, the Liberals and Trudeau have rebounded after a few bad months.

We also carry details of polls on tax cuts, housing, mental health and property prices as well as business and consumer confidence.