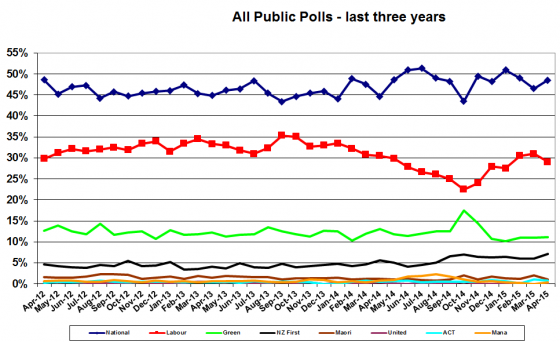 The parties are very close to where they were three years ago with Labour and Greens down slightly and NZ First up.

The executive summary of the newsletter is:

There were three political voting polls in April – a Roy Morgan, a One News Colmar Brunton and a NZ Herald DigiPoll.

The average of the public polls has National 19% ahead of Labour in April, up 3% from March. The current seat projection is centre-right 61 seats, centre-left 50 which would see a National-led Government.

In the United States Obama’s approval rating for foreign policy increases on the back of the draft Iran deal.  The country direction remains strongly negative. Jeb Bush remains just ahead of Scott Walker in support for the Republican nomination.

In the UK the Conservatives look likely to win more seats than Labour on 7 May but Labour appears to be in a better position to form Government as the SNP are on track to win almost every seat in Scotland, and have said they will not allow the Conservatives to govern.

In Australia the Coalition regain a bit of support, but still trail Labor. Abbott’s approval ratings have improved significantly but remain negative – as do Bill Shorten’s.

In Canada the Conservatives are better placed than a year ago to retain power, as they enter the final six months before the October 19 election.

We also carry details of polls in New Zealand on Ports of Auckland, the NZ Flag, the surplus, Iraq and euthanasia plus the normal business and consumer confidence polls.

This newsletter is normally only available by e-mail.  If you would like to receive future issues, please e-mail newsletter@curia.co.nz with your name, organization (if applicable) and e-mail address or go to this page to subscribe yourself.