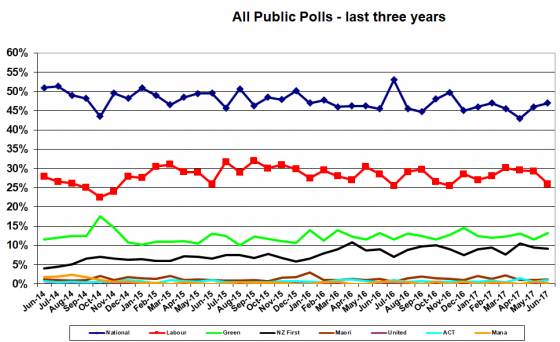 As you can see both National and Labour have been quite consistent since the last election National in the high 40s and Labour in the high 20s. They both dropped during the last three months (but National outperformed the polls), so will this happen again?

There were two political voting polls in June – a Roy Morgan and a Newshub Reid Research.

The average of the public polls sees National 21% ahead of Labour in June, up 4% from May.

The current seat projection is centre-right 61 seats, centre-left 48 which would see a National-led Government.

National’s party vote is around the same as a year ago but down from three years ago.

Labour’s party vote is below a year ago and three years ago.

In the United States there is not a lot of change, but Democrats now ahead by 5% on the generic congressional poll.

In the UK Jeremy Corbyn is now the Preferred Prime Minister and Labour lead the Conservatives by 5%. However the next election is 250 or so weeks away.

In Australia, Turnbull’s net satisfaction has fallen by 11% in the last two months as Abbott openly campaigns against him.

In Canada, The Liberals have a healthy 7% lead over the Conservatives, who now have a new leader.

We also carry details of polls on euthanasia, Christchurch Cathedral, and the Budget as well as business and consumer confidence.